5 of the best cycling holiday routes in the UK 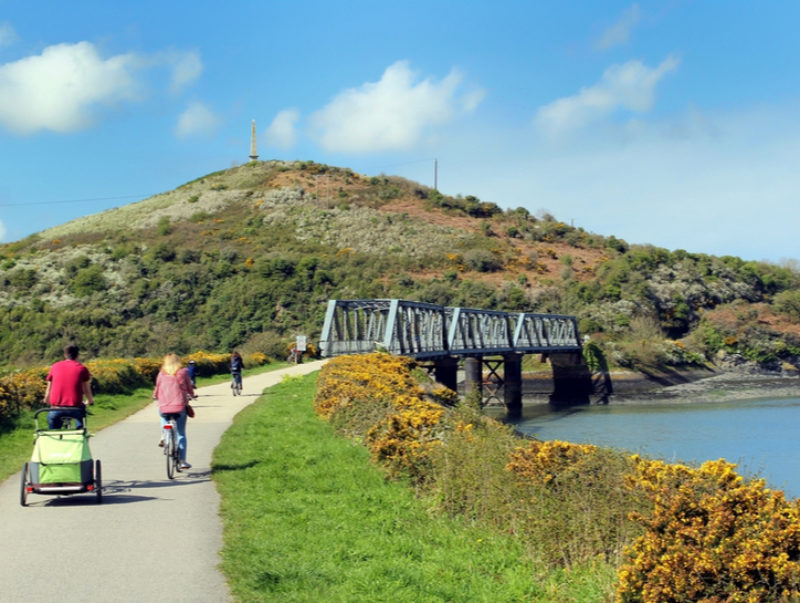 If you had plans for a summer holiday abroad, the coronavirus pandemic may have forced you to postpone those plans for the near future. The alternative – with hotels and campsites reopening and the UK tourist industry looking to make up lost time – is the staycation.

If you’d like to pair a UK break with the chance to get fit and take in the British air after months of lockdown, enjoy your look at the best places in the UK for scenic cycle trails. Plus, we’ll give you an idea of where to stay nearby.

Running for just over 17 miles between Padstow and the foot of Bodmin Moor, Cornwall’s Camel Trail follows a former railway line. Following the Camel Estuary and enjoyed by walkers and horse riders as well as cyclists, the London and South West Railway line is mostly suitable for disabled access and great for families.

In previous years, the trail could be expected to attract 400,000 visitors.

The Camel Estuary is a great spot for birdwatchers – you can expect to find kingfishers, little egrets, marsh orchids, and marsh marigolds – and the route also runs through a Site of Special Scientific Interest and a Special Area of Conservation.

Sea safaris and boat trips are available in Padstow with the chance to see puffins, dolphins, and possibly even minke whales. The town itself is famous as the home of TV chef Rock Stein, and Paul Ainsworth has a restaurant there too.

At the other end of the track, Bodmin offers plenty to do for all ages. Including the 13th century Restormel Castle.

Experienced cyclists can head off the Camel Trail to take in the picturesque Cornish villages and country lanes along the route where plenty of accommodation options are available. If you are looking to stay at either end of the track try Rick Stein’s St Edmunds House or at the trail’s end, try the 4-star Waterside Cornwall hotel.

At a mere nine miles, this is one of the shortest cycles on our list. Perfect for beginners and families but packing a lot into its short run, the track begins in Hulme End and ends in Waterhouses on the edge of the Peak District.

A natural cavern classified as a Karst cave and sitting 260 feet above the valley floor, Thor’s Cave is a regular tourist spot, also popular with rock climbers. Local evidence suggests humans were occupying the cave as far back as 10,000 years ago. Stone Age flints were fashioned in nearby Ossum’s Cave at Wetton Mill.

Wetton Mill also acts as the start (or end) point for the Manifold Way. Mostly car-free, the trail is great for families and casual cyclists, and on the edge of the Peak District, it’s a wonderful place to set off from on a day’s exploring.

If you’re looking for accommodation nearby, consider the stunning Stanshope Hall.

At around 170 miles, Hadrian’s Cycleway, National Cycle Route 72 is lengthy but forgiving terrain and plenty of rest stops mean it’s still accessible to amateur cyclists. Plus, of course, it can be tackled in bite-sized stages.

The route begins in Kendal, a Cumbrian market town, just eight miles from Lake Windemere. Home to a Roman Fort but more famous for a certain mint confection, the route heads north from Kendal.

The route heads across the north of England, taking in the Lake District and its swathes of unspoiled countryside, through Carlisle via Newcastle-upon-Tyne to Tynemouth before arriving in the coastal resort of South Shields in the west.

Sticking close to Hadrian’s wall for much of the route, it ends at the Roman Fort (and museum) of Arbeia in South Shields.

With stunning scenery and plenty of accommodation options all along the route, if you’re looking for an intermediate-level ride, consider the Anthorn to Carlisle section. Mainly flat, and with awe-inspiring views over to Scotland, as well as the RSPB reserve at Campfield Marsh, it’s a challenging but rewarding section.

And if you reach Carlisle but have the will and the energy to keep going, head seven miles further on and consider staying at Heads Nook Hall Bed and Breakfast near Brampton.

If the 170-mile Hadrian’s Cycleway feels like a long way, why not try the 13-mile off-road route between Bristol and Bath?

Widely used by walkers and cyclists – and with disabled access along the fully tarmacked path – the former Midland Railway route was constructed by cycling charity Sustrans.

With a fascinating history and much to see at both ends of the trail, consider staying in either city where available accommodation is plentiful, or opt for somewhere along the route and set out on a shorter cycle ride in either direction.

In Bristol, why not visit the SS Great Britain, capture a view of the Clifton Suspension Bridge or visit the Bristol Museum and Art Gallery. The museum, along with the M Shed and Bristol Archives are reopening throughout September.

The Royal Crescent and Bath Abbey are both worth a visit when you arrive in Bath. So too, are the recently reopened, Roman Baths.

The National Cycle Networks Route 8 – described by cycling charity Sustrans as ‘an exciting long-distance route which will challenge and amaze you’ – begins in Cardiff in south Wales and ends on the northern tip of Anglesey.

Running for more than 243 miles and estimated to take more than 20 hours, it’s one for the committed cyclist.

Thankfully, it can be broken up into smaller routes, including the 55-mile Taff Trail from Cardiff to Brecon in the Brecon Beacons National Park. Even better, pick up the Taff Trail in Merthyr Tydfil and enjoy a still challenging but rewarding 25-mile route.

From the industrial town, through beautiful Welsh landscapes along old railway lines and forest roads and along the banks of the river of the Taff, you’ll end in the beautiful market town of Brecon.

Enjoy the dramatic landscape and then relax after a hard day’s cycle at Gliffaes Country House Hotel.

5 important things to remember when inheriting an investment

3 potential pension tax traps and how to avoid them